This Co-Learning Plan provided an overview of the Makerspace movement -- an initiative that supports creative process and innovation through providing a workshop space where amateurs and professionals interested in electronics, robotics, software, wood or metal working or art could expand their skills, invent, and build new products in a collaborative environment. The project also focused on the makerspace programs developed by public libraries and suggests the creation of 'maker' programs at public libraries to support an innovative and entrepreneurial ecosystem.

Cristina Benton is a PhD candidate in the Department of Geography, Michigan State University (MSU) and a graduate of the Master in Urban and Regional Planning at MSU. In her academic work, Benton wrote several research projects and presented to several conferences. Benton also taught the Economics of Planning and Development course at MSU in the fall of 2012. Since 2007, she has been working as a community development assistant in the Department of Planning, Building and Development with the City of East Lansing. In this position, Benton has assisted in the implementation of several economic development programs including the Technology Innovation Center, and has completed several community and economic development reports.

Tim Dempsey is Director of the Department of Planning, Building, and Development for the City of East Lansing. Tim has oversight for the department's five divisions: planning and zoning, community and economic development, building, housing, and downtown parking. Tim is responsible for a staff of twenty fulltime employees and 30 part-time employees, and a combined annual budget of nearly over $9 million. Previous to his current role, Dempsey served as the city's Community and Economic Development Administrator. Dempsey has been responsible for leading several key strategic initiatives for East Lansing including several downtown mixed-use redevelopment projects, a progressive brownfield redevelopment program, and the City's tech-based economic development strategy focused around the Technology Innovation Center and strategic partnerships with Michigan State University.

Lori Mullins, LLA is the Community and Economic Development Administrator for the City of East Lansing. Ms. Mullins leads a team of three full-time employees and is responsible for administering activities related to economic development and business development for the City as well as administering the City's Community Development Block Grant program. Her experience includes leading the City's previous Comprehensive Planning efforts, providing staff support to multiple boards and commissions and working with multi-disciplinary teams to implement capital improvement projects. She has also been a project manager on multiple redevelopment projects, planning projects and grant administration assignments. Mr. Mullins has been instrumental in the development of the East Lansing Technology Innovation Center and has presented and written about this effort on multiple occasions.

Kristin Shelley is the Director of the East Lansing Public Library (ELPL). While at the ELPL Kristin has implemented self-checkout and self-pick-up holds, collaborated with an area church to offer after-school teen programming, begun aggressively fundraising, introduced a new downloadable e-book platform and ELPL began using iPads to facilitate more proactive customer service. In 2012, Kristin overviewed the ELPL's very successful levy campaign. Kristin is an active member of the One Book, One Community Committee and of the East Lansing Rotary Club. Before moving to Michigan in 2011, she worked at the Worthington Libraries in Worthington, Ohio as the Deputy Director. Prior to that, Kristin was a librarian in the Columbus Metropolitan Library system. In 2003, Kristin was awarded the Time-Warner Vision in America Award for her work with English to Speakers of Other Languages (ESOL) populations. Kristin received the Columbus Literacy Council's Friend of Literacy Award in 2007. 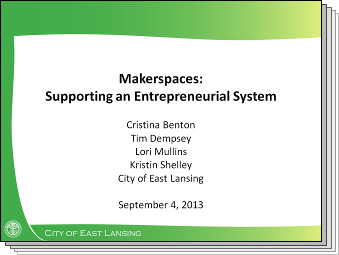 Powerpoint presentation from the 2013 Innovate Michigan! Summit
View the Report