2018: Highlighting the Hustle: Exploring the Underground Economy in Detroit

Economic development initiatives targeting entrepreneurs have found Detroit to be a ripe breeding ground for talent, and for those entrepreneurs who are able to participate in those programs this has been a time of great fortune. The reality, though, is that these programs are not open to all who desire to ascend to the entrepreneurial ranks. For a multitude of reasons that need to be further identified and explored, some aren't able to take advantage of this opportunity. For some entrepreneurs, transitioning from being 'off the books' (or, as referred to in the title, underground) to 'on the books' would result in a significant pay cut due to the costs of conducting business. The research proposed in this study will focus on the definition of the underground economy, identification of susceptible participants, barriers of entry that have prevented participants of the underground economy from engaging in standardized entrepreneurial development, an attempt to quantify the potential economic impact of the underground economy in the region and why a commitment to reconnect that effort to the overall impact benefits the region and propose recommendations on how funders can be more inclusive in their funding guidelines. 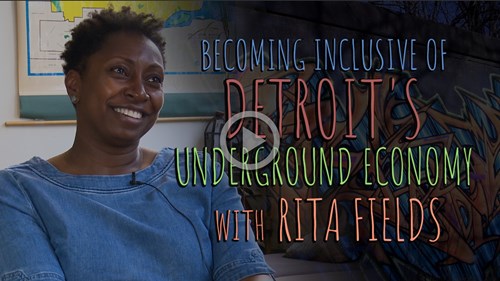 Dr. Rita Fields is an associate professor of management in the School of Business at Madonna University in Livonia, Michigan and an adjunct professor of healthcare administration at Central Michigan University. Dr. Fields offers expertise on human resources and strategic business issues through Copper Phoenix Consulting, LLC and is the CEO of 313 Industries, a CNC machining and milling corporation. Dr. Fields is actively engaged in social justice issues within her community, serving as a consultant on both local and national societal issues.

Dr. Fields is a member of the board of trustees at Sinai Grace Hospital in Detroit. Crain's Detroit Business named her among "40 under 40" in 2008. In 2009, the Fusion division of the Detroit Chamber of Commerce honored her with a Young Professional in Health Care Services Horizon Award. In both 2010 & 2011, she was selected to serve as a United States delegate with SHRM to explore human capital issues in both China and Brazil. She was selected to be a presenter at TEDxDetroit in 2015. In 2016, she was honored with a Women's History Month Careers Mastered Leadership in Action Award. In 2017, she was a featured speaker at the Detroit Policy Conference sponsored by the Detroit Chamber of Commerce.