This project evaluated the feasibility of reusing abandoned property in Detroit. Afterhouse looked at the reuse of a specific abandoned structure on 3347 Burnside. A group of students, artists, architects, and faculty from University of Michigan's Taubman College deconstructed the house in order to reuse the house's foundation for a semi subterranean geothermal greenhouse. This prototype serves as a model to be replicated in order to increase the city's economic viability.

Steven Mankouche is a registered architect and an Associate Professor of Architecture at University of Michigan's Taubman College. He teaches architectural fabrication, construction as well as graduate and undergraduate design studios. 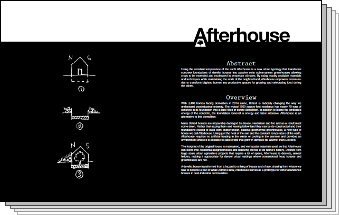 Presentation from the 2014 Innovate Michigan! Summit

Like too many Detroit houses irreparably damaged by disuse, vandalism, and fire, the house at 3347 Burnside had to come down. Rather than razing the home and leaving fallow land, a team, led the University of Michigan architecture professor Steven Mankouche and artist Abigail Murray, consisting of students, artists, architects, and urban farmers worked together to deconstruct the home and reuse the foundation to build the Afterhouse; a semi subterranean passive geothermal greenhouse.

In many of Detroit's neighborhoods, abandoned homes are scattered and mixed throughout streets with occupied housing, creating a drag on the community. The Afterhouse improves it's neighborhood and its surrounding community by replacing a dangerous and unsightly structure with a safe and productive alternative, serving as a place for neighbors to gather and enjoy fresh produce regardless of the season. Afterhouse also offers a an entrepreneurial opportunity, skill development and a sense of community for the those living in the neighborhood.

This student-led, faculty-guided project is inspiring to communities across Michigan. For those who wish to embark on a similar project, the Afterhouse report describes the deconstruction and construction process, and the conditions in which the Afterhouse was able to succeed. Much of what is described in the report communities should find helpful as a replicable plan. An Afterhouse type of project could make a profound impact on other communities in Michigan facing the same issues due to home abandonment and blight, while making the neighborhood safer and more appealing to future residents.

The Afterhouse project continues to be recognized and commended, it received two prestigious awards; the 'Un-built Architecture Award', from the Boston Society of Architects, and a '2014 Research and Development Award' from Architect Magazine and in addition to earning three rounds of REI support, the project received $14,800 in crowdfunding, and an additional $135,000 from the Kresge Foundation's 'Innovation Projects Detroit' program.