Joy-Southfield CDC's goal was to create a healthy community that is known as the greenest neighborhood in Detroit. This project focused on improving the economic health of the community in two ways. It developed a short-range strategy to advance the CDC's on-going efforts to develop a commercial section of Joy Road into an attractive, pedestrian-friendly district that offers an array of retail opportunities. The CDC also wants to attract green industry to the neighborhood's main industrial area, work it has begun recently. The project examined specific green industries to assess which would be most likely to come, and to offer jobs opportunities for community residents. 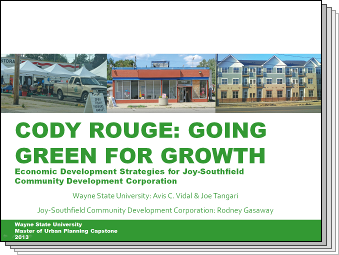 Rayman Mohamed, Ph.D. is Associate Professor of Urban Studies and Planning and Director of Undergraduate Studies at Wayne State University. His research interests include brownfields redevelopment, understanding the decision-making of developers and the role of psychology in planning. Dr. Mohamed previously worked for The Carter Presidential Center. He has published in the Journal of Planning Education and Research, Urban Studies, and Urban Affairs Review. He holds a Bachelor's degree in Civil Engineering from the University of Guyana, a Master's degree in Environmental Engineering from the University of South of Florida, and a Ph.D. in City and Regional Planning from Cornell.

The Going Green for Growth project conducted by Wayne State University Master of Urban Planning students and three of their professors aimed to improve the health of the Joy-Southfield population and to ultimately transform the community into the "greenest neighborhood in Detroit". The goals that helped shape this vision centered on creating a downtown on Joy Road with diversified retail in order to reduce vacancy, increase density, and promote walkability and a healthy lifestyle. By developing several short-term and long-term implementation strategies, this project helped the Joy-Southfield Community Development Corporation (JSCDC) create a solid blueprint for future economic development.

The recommended short-term strategies in the student report started with establishing an organizational framework to be the voice for the district and foster the creation of a downtown. The framework was intended to help the community assess its geographical strengths and weaknesses, determine identify businesses already established within the district, and leverage assets to attract the kinds of businesses that would have a high probability of success.

The project team suggested physical changes to the streets to promote walkability and a retail-oriented development pattern using the "Complete Streets" standards. This would put an emphasis on pedestrians having the right of way to cross streets and travel safely throughout the district.

The report also recommended emphasizing the need to bring in green industry to grow and create more jobs for the neighborhood's residents. As the presence of green industry increases in the nation, Joy-Southfield Community Development Corporation (JSCDC) would continue to identify more approaches to attract and facilitate green business growth.

"The Going Green for Growth student project has been a catalyst for our neighborhood", said Rodney Gasaway, Director of Community and Economic Development at JSCDC.

According to Mr. Gasway, the downtown redevelopment is almost complete. A one-mile stretch of Joy Road between Southfield Freeway and Rouge Park has been repaved and incorporates "Complete Streets" standards. The water main and concrete were replaced, new LED lighting has been installed, and a water catchment system has been put in place.

The Cody-Rouge Business Association (CRBA) has been formed and is now taking steps toward fulfilling recommendations outlined in the report. Mr. Gasaway reports that since the project's completion, over $50,000,000 has been invested in the neighborhood, new football and track facilities, school renovations, and updated parks are only a few of the recent improvements. Recently, Verndale Products Inc. opened their second Detroit based operation in the neighborhood, investing an estimated $20,000,000 in the green industry build to renovate the building that had been sitting vacant for 15 years. The JSCDC is now working with Eastern Michigan University to create a marketing, advertising, and social media strategy to continue attracting new green industry businesses.